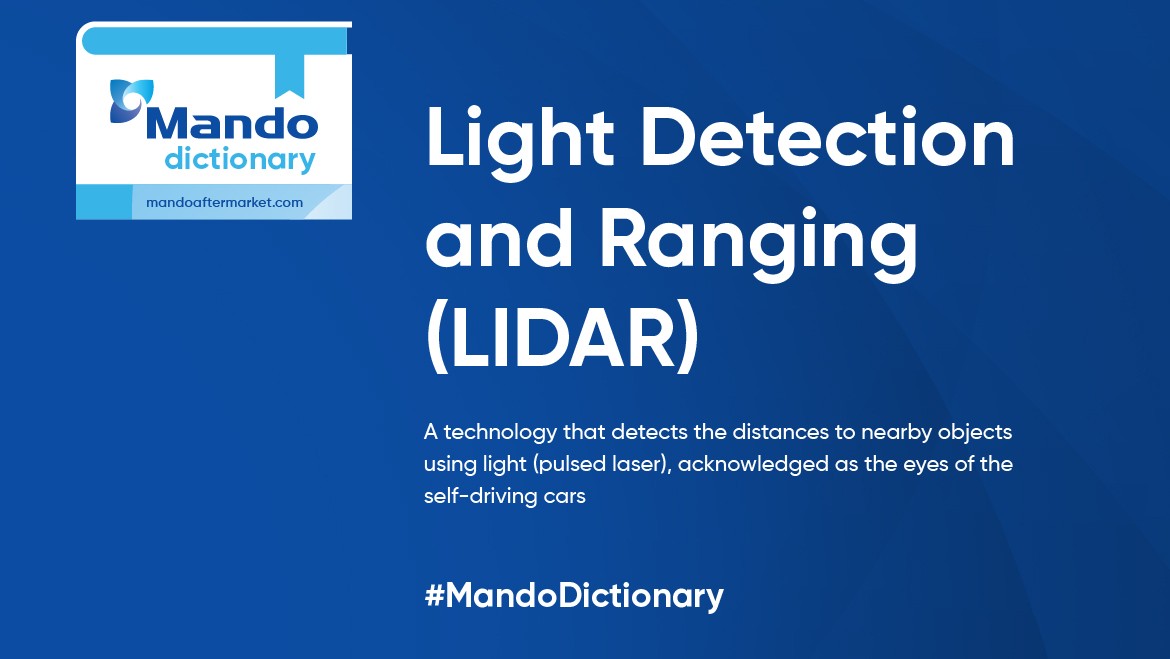 There are several acronyms frequently used in the automotive world. Admittedly, most of us do not know what these acronyms refer to. But don't worry,  Mando is by your side!

LIDAR is the acronym for "Light Detection and Ranging".

LIDAR sensor uses a 905 nm wave width laser beam. Thanks to this non-dispersive laser beam, the system's error margin reduces down to a few millimeters.

LIDAR is able to rotate 360 degrees. Sending millions of laser beams to every direction in a second, LIDAR goes beyond perceiving the distances to the objects around and understands their shapes as well.

The biggest obstacle ahead of the widespread use of LIDAR sensors in the automotive world is its price over $ 1000.  Another issue is the sensor's large size due to its complex structure.

LIDAR sensor is generally mounted on the vehicle roof.  However, the large space it occupies may make the vehicle resemble an ambulance.

Another controversy surrounding the use of LIDAR sensors is that they are not very good at recognizing dark-colored objects. Dark black objects do not reflect the laser rays. And when laser rays are not reflected, LIDAR fails to fulfill its intended function. This problem, however, can be eliminated with high-resolution cameras mounted on the vehicle.

One of the world's leading electric car manufacturers, Tesla, announced that it may develop vehicles without LIDAR sensors that use high-resolution cameras to recognize the environment. However, for such a technology to perform its function, it needs an artificial intelligence that does its job well. On the other hand, to function well, artificial intelligence requires a large data set.  Tesla has been collecting its customers' driving data since 2014. Yet, the other manufacturers are not as lucky as Tesla.  Therefore, it is essential for the LIDAR technology to be at more economical prices. Companies developing automotive technologies in different parts of the world have already taken some steps in this regard. Thanks to their steps, the yearend prices of LIDAR systems are expected to decrease to $ 500.